Our third Easter meet in the South of France took us to the Ariège region of the Midi Pyrenees.  Our party of ten – 4 of us there to climb and 6 for the walking (one of whom had broken a leg on her first French  meet last year) – was housed in an excellent gite in the too-small-for-its -own-bakery village of Bedeilhac. The village is just North of Tarascon sur Ariege ,  the nearest town with supermarkets. Extensive walking began at the door; while Calames, one of the region’s major crags towered above us. As enthusiastic self-caterers (on a rota basis) we were not overly put out to find the recommended local restaurant closed and the out-of-village establishment only ok. In fact we ate well …very, very well.

Day one, all 4 climbers made straight for Calames, promptly missed the climbers’ path off the GR and found a difficult approach steeply up through dense maquis. Once there the climbing on unpolished limestone was excellent. John W and Dave P made for the initiation slabs; Andy and David B went on to the justly popular Sector Papy, climbed a clutch of superb 5/5+ routes and left planning a return bash.

Inevitably a fine Sunday attracted w/e crowds to the crag, so when Andy and David had done the only lines available on Les Grandes Dalles, they sought out the remoter sector Le Col and chose a few of its more amenable routes. Meanwhile John and Dave drove south to the gneiss slabsof Appy, a cragwith starts so fierce that top-ropes were in order.

Monday both parties returned to Calames. John and Dave ascended a handful of fine routes at Le Col. For Andy and David it was the big day on Le Pilier des Cathares.  Their route ‘ Pour Lubeline’  meant five long and sustained pitches on a south facing wall in 25deg. They thought they’d sussed out what 5+ felt like, but these were somewhat harder; the climbing was varied, continuously interesting did not disappoint. Exhilarated then suddenly drained they finally sat at the summit tower with beauty all around and recovered. And that’s what it’s all about!

In the next few days John and Dave now well into their stride travelled to Ax-les Thermes. There the climbing was so good they returned for a second day only to be thwarted by the only rain of the holiday. The granite crags of Auzat gave them lots of good climbing next day, first on friction slabs, then on steeper stuff ‘with your actual holds!!’ and to finish a 2 pitch route with those great views from the top. On their final day they returned to climb on Le Col . All round, Calames had proved, in Dave’s words, to be ‘a climbers’ paradise’.

And  the Ariege proved to be excellent walking  country too with scenic paths, many of which were ancient mule tracks, straight from our base , so over the 10 days very little driving was necessary. The wild flowers were magnificent in variety and abundance, some remaining so far unidentified.

The group had a memorable walk from the nearby Col du Port (1250 m) up to a grassy, snow-patched ridge at about 1700 m giving great views of the high Pyrenees all day. The eastern part of the same ridge was traversed on another day. Even the shorter walks were varied – woodland, low hills and ruined towers. Ours was a brilliant walking experience; of course, the almost unbroken good weather helped!

Tuesday morning’s showers had suggested to most of us a visit to the Grotte Prehistorique de Bedeilhac to see the cave art – just fascinating! But almost as amazing was the fact that a light aircraft was flown into and out of the cave for a film. Six of us went in able-bodied and David emerged with a bad back which meant a rest from climbing.

Luckily Andy was hoping for some walking and David for some sightseeing, now achievable thanks to kind drivers, John B, Lynn and Andy. The tourist sites visited over the next few days, all Grand Sites du Midi-Pyrenees, were: Foix, once the centre of a great dukedom;  St Lizier, an important Roman and medieval town; the Pont du Diable over the river Ariege; the Cathar stronghold of Montsegur and Roquefixade –  the last two fortresses in spectacular settings with spectacular views.

But we were not done with the caves after the first. The Grotte de Niaux is home to magnificent prehistoric cave art that drew gasps from our party when first illuminated on the walls around us. ‘Living’ art some 13,000 years old in a setting as dramatic today as it was then (well almost – the illumination then would have been flickering tapers; ours was angled torchlight that brought out the way those Neolithic artists exploited the surface irregularities. But what an experience!

Dennis and Jackie left us on Saturday (Dennis’ last day had been marred by a stomach upset), and Karen and Mark joined us, ‘fresh’ from walking  The Cathar Way,  250km from the Med to Foix. They and John W were to stay on another day after us and return home by train.

Bedeilhac is currently being threatened. An international mining company has put in a planning application to mine rock from crag Calames. Apart from the effects on climbing, the locals warn of noise, dust, quarry traffic and general degradation of the environment. There is talk of murky goings-on in local politics. The owner of our gite opposes the scheme; we signed his petition to be sent to the Prefecture. 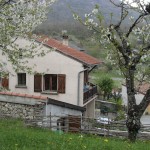 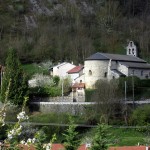 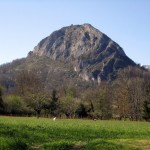 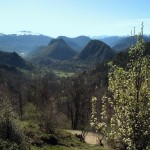 Calames is the hill on the right, 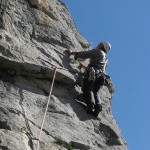 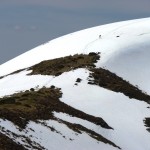 DC goes for it 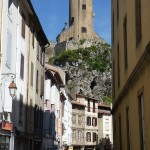 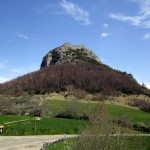 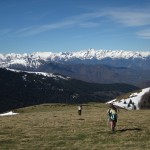 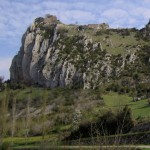 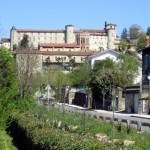 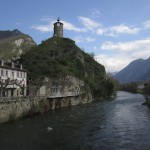 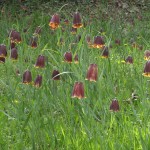 Wild fritillaries on the gite lawn